It's been both a hectic week and a hectic year. But both bring much to be thankful for.

On Tuesday, we were able to have a get together with Robbie's NICU BFF Gavin. Gavin and his mom came first and hung out for a little. Then his dad joined us and we all had dinner and visited. 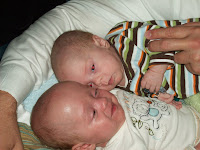 Since we can't get out much or see almost anyone with children, it was nice to have company. We're grateful to have friends!

Thursday, Robbie visited the pediatrician again for a weight check. Unfortunately he wasn't quite up to snuff. He weighed in at 7lb 7oz. We would have preferred to see something closer to 9lb.

His eating had been worse and worse. The reflux continues to plague us. It's frustrating and upsetting to see him fight his food. Despite being starving, he'll swat at his bottle, hide his face, cry, squirm when you try to feed him. David calls it "full combat mode."

Dr. P upped his medicine and suggested adding formula to his breast milk again in an effort to up his caloric intake.

The worst part is that his poor weight gain gave him a diagnosis of "Failure To Thrive." It's really just an ugly term that means "not gaining weight properly." but it's hard not to cringe at the word "Failure" in regards to your baby. As his mother, my most basic function is to feed him. So when he doesn't gain, I can't help but feel like the failure is mine.

Fortunately Dr. P was overall very positive. Developmentally he's right on track for his adjusted age. Her exact words were "his physical exam is perfect." If only we could get him to gain more weight, everything would be bliss.

The good part is that since she upped his meds, things have improved. While we still have some battles to eat during the day, his overall intake is better. We see the GI specialist next week and are hoping for a better weight gain.

The formula was pretty much a no-go. He'd eat even less than and then proceed to scream for an hour afterward. He just doesn't tolerate it well. We're back to plain breast milk again now and doing better.

On Saturday, Robbie got his first Synagis shot. It's a shot to help protect him if he were to get RSV. RSV is a very common virus that for most people means minor cold-like symptoms. But for newborns, particularly preemies, it can be very, very serious. Synagis is not a vaccine. It would simply lessen the severity of RSV if he were to contract it. We certainly hope NOT to get it. That's the reason we're under quarantine until April. Synagis is very expensive and insurance companies don't like to pay for it. We were very fortunate to qualify for it. Thank goodness for the medicine and for insurance to cover it!

In other thankful news, David's cousin received a heart transplant this week! Becky has struggled with her heart for a number of years. This summer it became clear that she was going to require a replacement and she's received one. She's currently in the hospital here in the city undergoing treatment for rejection. We'd appreciate your prayers for her and for the family of the person who donated the heart. He or she is truly a hero. 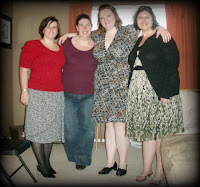 Last weekend, I was able to attend the baby shower for our friend Amy. It was the same day as the trivia night for their benefit. I was thankful both to be able to be out of the house and to celebrate their baby.

We weren't able to attend the benefit, but for good reason- IT WAS SOLD OUT! They were able to raise some money for Matt & Amy and that's always a reason to be thankful.

In a the-world-is-small twist, America's Got Talent contestant Neal Boyd was on hand to sing Amazing Grace. He actually went to school with David and used to sing at his church on occasion. David was disappointed that we didn't get to attend if for not other reason than to see Neal. 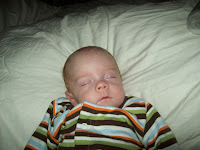 Of course, the biggest reason to be thankful this year is obvious- Our own remarkable Robbie. His conception was a miracle to start with. His birth yet another. And the amazing way that he is progressing is yet a 3rd. We truly are blessed.

Finally, we are incredibly thankful for God's amazing grace and love. Without him, none of this would be possible.

Posted by David, Trish and Robbie Cox at 6:27 AM

What a beautiful entry. :) Praying for David's cousin and family, as well as, of course, Robbie to gain weight. And how great to hear how well the benefit went!!
Btw you look fab in the pic, hot mama.