A lot of laughter

One of my favorite parts about parenthood is the random stuff that tickles him. This particular evening, David threw Robbie's O-ball up and caught it. This was apparently the funniest thing Robbie had ever seen, and deserved applause as well.

He's definitely ticklish. I dare you to listen to him and not be tickled, too.

This is a game Grandpa plays with Robbie quite often and Robbie just eats it up. This time it was Grandma's turn and Robbie was HIGHLY amused.


In amazing news, Robbie actually took 2 unassisted steps on Christmas Eve! He took another today. He absolutely could walk if he chose. But right now he thinks our attempts to get him to stand or walk without help are hysterical. If you watch him, you can see he doesn't fall. He controls his descent. This was actually taken last week even before the steps.

Robbie loves music, even his Momma's mediocre singing. One of the biggest challenges in getting a child to talk is getting him to "turn on his voice." Music is a great way to encourage that, so we take turns "singing." (That's the "Row row row your boat" part is.)
Of course, hand motions are just plain fun. He sometimes mixes up the sign for "more", the Itsy Bitsy Spider motion and the "roll it" motion from Pat-a-cake, but usually catches himself and corrects. Sometimes he does the motion for the "spider" or "roll it" and looks at us expectantly, obviously requesting a song.

Posted by David, Trish and Robbie Cox at 12:43 AM 2 comments Links to this post 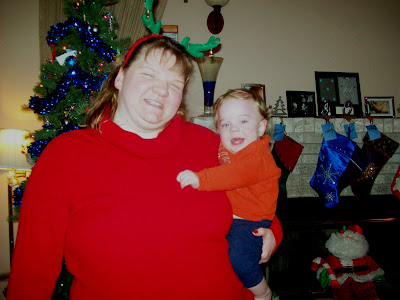 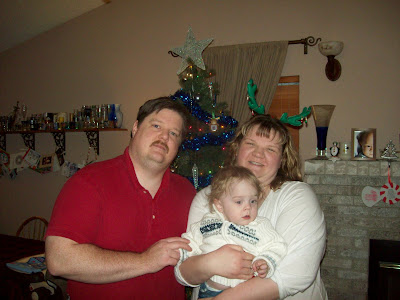 Posted by David, Trish and Robbie Cox at 6:09 PM 1 comments Links to this post 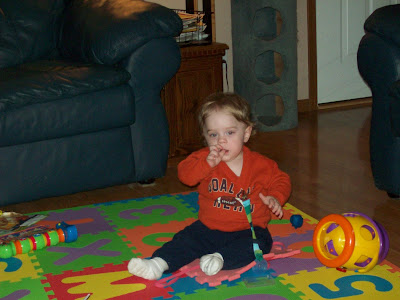 My old friend Lexi and I went to our friend Gavin's baptism party. 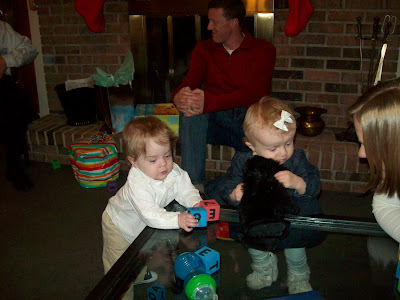 I still say Santa looks a lot like Gavin's grandpa. 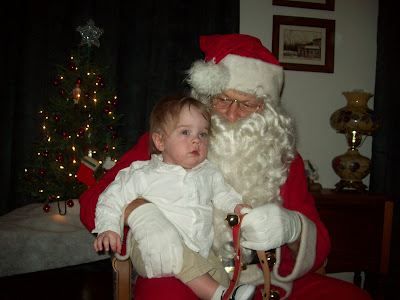 Mommy's friend and his daughter came to visit that day, too. 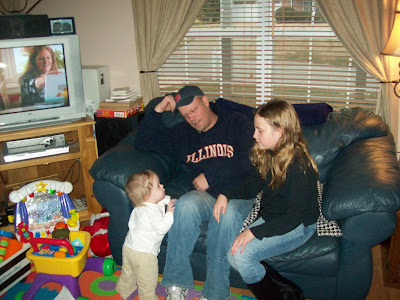 Let's see where this fits 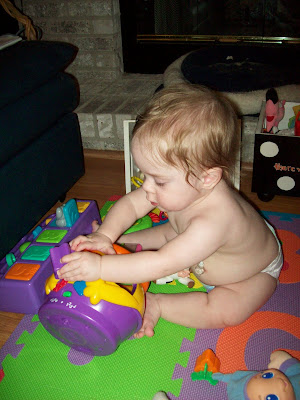 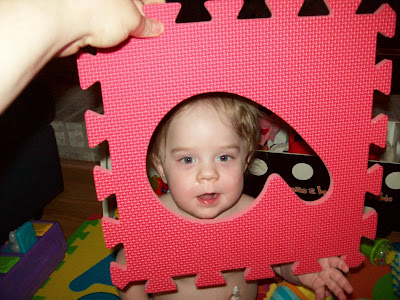 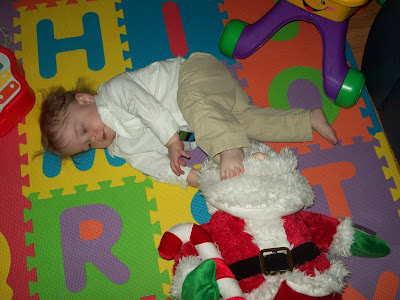 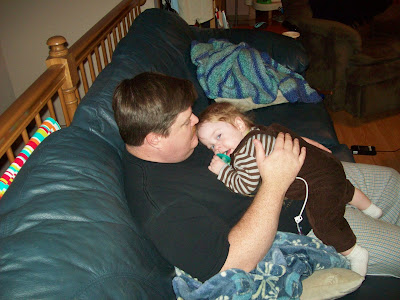 How many zeros in a million again? 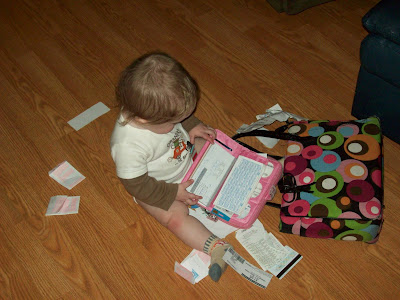 Taking in the sights with Dad 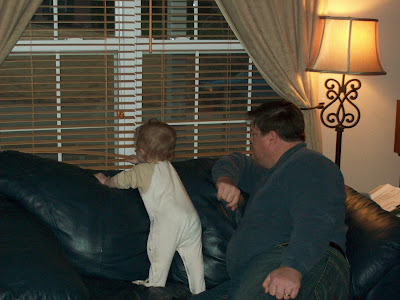 The jumper is even fun when I'm not in it. 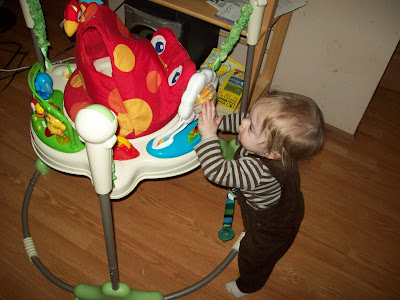 The tongue helps point the way. 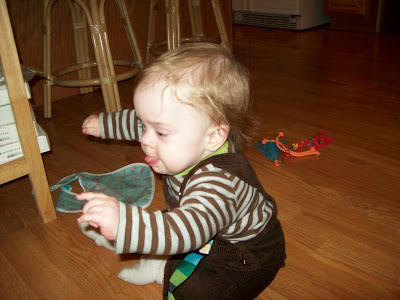 Nick Nolte is my hero. 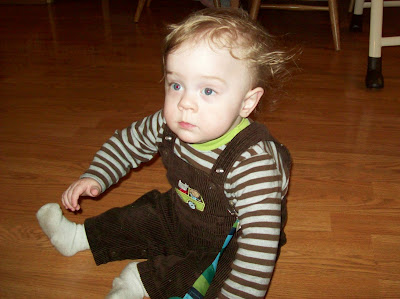 He's got eyes of the bluest skies as if they thought of rain. 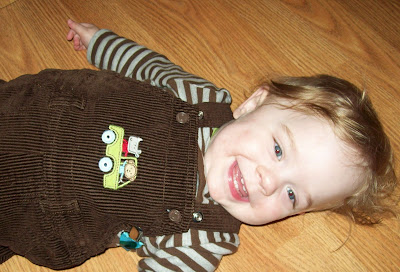 Posted by David, Trish and Robbie Cox at 1:27 AM 1 comments Links to this post

Just a quick note to say ear tube surgery is cancelled again. He has another cold (yes, ANOTHER) and started coughing a bit last night. By 3:30 this morning, his breathing was sounding thick and he was coughing pretty hard. So we started nebulizers for the 4th time this year.

I called to cancel and the surgeon himself called me back. I think they are starting to wonder what's going on, but I don't know what we can do about it. He said they can do the surgery with a head cold, but with Robbie a head cold turns into wheezing almost every time.

I never thought I'd see the day I missed quarantine, but I think I'm officially there. Say some healing prayers for Robbie!

Updated:
Spoke w/the pediatrician and she added pulmicort to his drug cocktail, and actually wants him to stay on it for the rest of the winter. Twice a day until he gets the tubes, then once a day for the duration of germ season.

She was sure to point out that he now holds the record for most tube reschedules. My little guy is setting records everywhere he goes.

Posted by David, Trish and Robbie Cox at 12:10 PM 2 comments Links to this post

It was brought to my attention today that I haven't updated in forever. My apologies!

Thanksgiving was very low key and lovely. I somehow managed to contract the plague and spent most of the weekend obsessively washing my hands in an attempt to keep it away from Robbie. I think I've succeeded since he's not sick (yet.)

He did get yet another double ear infection. By Wednesday night before T-day it was pretty apparent, but of course, there wasn't much I could on Thursday. Friday we saw the covering doctor and she confirmed our suspicions. She wrote the script for the antibiotic to continue past the 10 day course, so that it should take us right up to his next attempt at ear tubes.

That attempt is scheduled for this Wednesday the 9th. Keep your fingers crossed! He needs to be healthy, specifically with clear lungs, so they can use the anesthesia. This is take #4, and I swear if it doesn't happen, I will cry. He's had at least 2 ear infections a month since August, I believe. I've honestly lost count at this point.

Other than ears, though, he's doing amazingly. His therapists are blown away, we're blown away. It's great to see.

He can now "answer the phone" (put the phone, or any object really- even his hand) up to his ear and say "Hello?", he waves hi & bye, he can give you five (though high-five still confuses him. He wants to clap his own hands together), play "so big" & "Peek-a-boo", he claps and conducts for almost anything. He's still signing "more" and "all done" though he prefers to say "all done" (though that one is a little annoying since he wants to be all done eating when he really should be eating more). He can point to his hair & his nose, and yesterday he pointed to his eye once, though that one he hasn't repeated yet, so maybe it was a coincidence.

He's moving a TON. I think he's finally hit the point where he's crawling more than he's butt-scooting. He's cruising a lot, climbing over things along the way. He even stood unassisted for about 10 seconds in physical therapy last week. Now he's started to let while standing. He clearly wants to walk, but his skills haven't quite caught up to his desires yet. This, of course, has let to a ton of falling down.

We put a mat in the living room to help cushion him a bit, but he still manages to knock his head really well at least once a day. Tonight he somehow managed to stumble while crawling and gave himself a very large bump on the forehead. I was only a few feet from him when he did it, but didn't see it happen. I think he must have hit the corner of the wall because it broke the skin and left a HUGE welt. Even David gasped when he saw it. The swelling did go down a bit about an hour later, so hopefully it's not too horrifying in the morning.

Eating is pretty steady. The Wednesday before Thanksgiving, he suddenly decided he didn't want to eat at all (and this was after 2 1/2 or 3 weeks of continually eating really well- as much as 7 oz of solids on particular day) and it continued all of Thanksgiving weekend. I assume it was because his ears were so awful. By Tuesday it picked up a bit and has improved a little bit most of the week. He hasn't had any superior eating days, but he's close to normal for him. (averaging about 4 oz of solids per day.)

Along with all of his great new skills, he's also learning a bit more independence. With that has come the dreaded Temper Tantrum. I'm trying to focus on the fact that it's normal and expected, but man, he will ball up his fists and grit his teeth and just shake in anger. He's so serious that it really is funny, but we don't dare laugh. For the most part, we're just ignoring it. He hasn't lashed out (yet) so for now, that's working.

All in all, he's doing really well. And of course, he's cute as ever!

Now that he can pull up to stand at the dishwasher, the dishes are his chore, right? 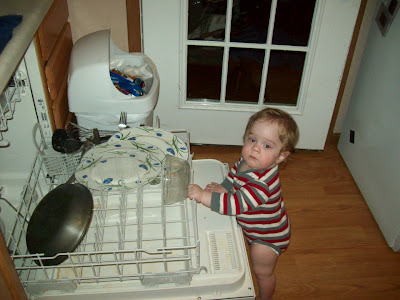 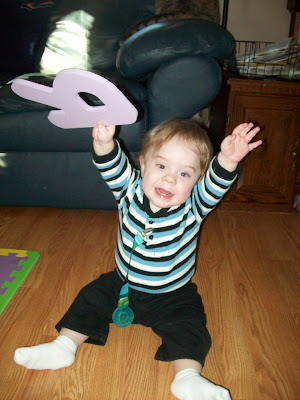 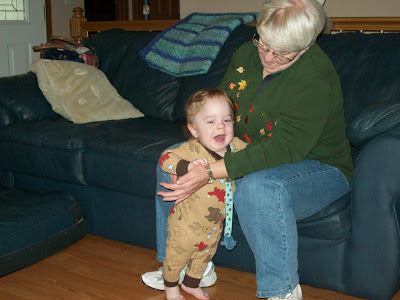 These are my groceries. Get your own. 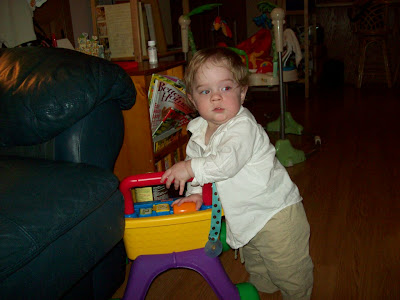 Here Grandpa, let me show you how it's done. 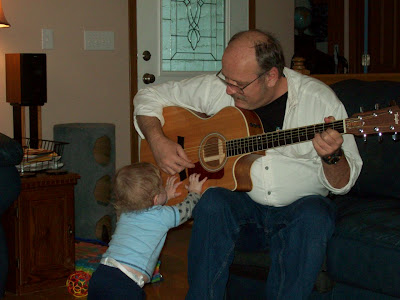 Posted by David, Trish and Robbie Cox at 1:38 AM 2 comments Links to this post