Mommy got the coolest ballons for her birthday! 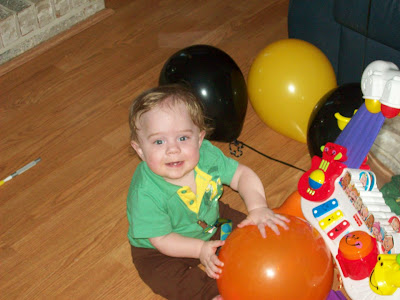 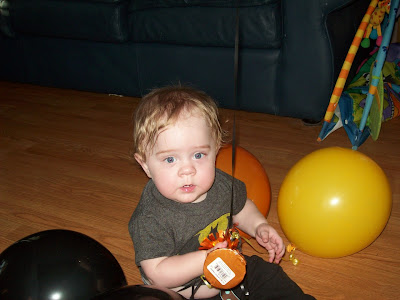 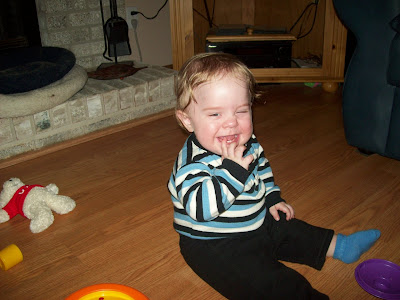 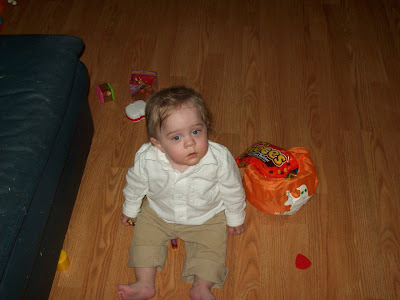 Help! Grandma's trying to steal me! 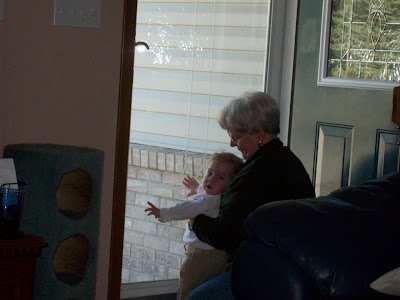 Stairway to Heaven, anyone? 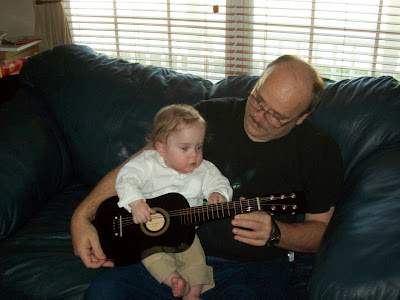 Look how long my hair is getting. 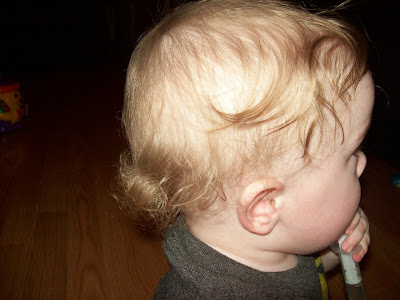 The high chair rocks. It's just that crap that put on the tray that sucks. 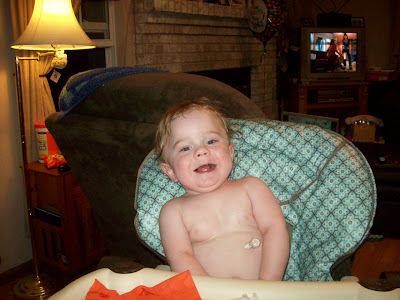 Just let me go, grandpa. I'm ready to take off! 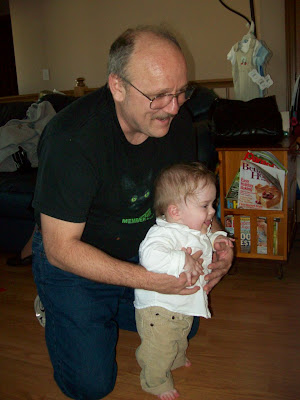 When I think about you, I touch myself.... 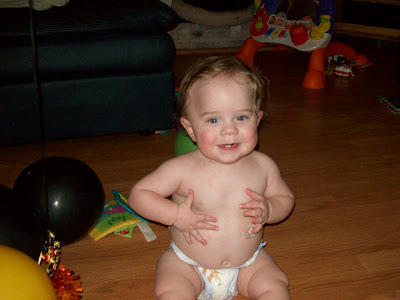 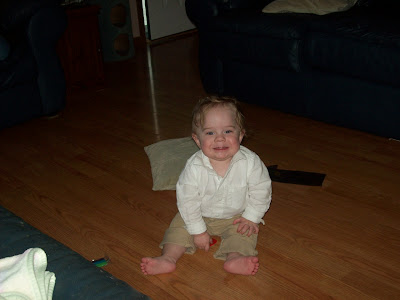 Posted by David, Trish and Robbie Cox at 1:45 AM 0 comments Links to this post

Robbie has had an exciting week. His grandma (David's mom) has been visiting all week and keeping him home with her during the day. They've had a ton of fun. His grandma is happy to hold his hands and walk him through the house all day long. What more could a pre-walking baby want?

It's also meant Robbie hasn't gone to daycare all week. I'm sure he misses his little friends, but it's one less week he's exposed to germs, so it's a bit of a relief for us.

Of course, even though he's not at daycare that hasn't kept us from what has become our weekly visit to the pediatrician. He's had ingrown toenails for about a year now. I try to keep them properly trimmed and goop them up with neosporin when they get red, but this week, they won. Both big toes started looking really ugly on Monday. I was hoping to win the war, but last night one of them started oozing some grossness, so we headed in to the doctor this morning.

She confirmed they are infected and said he needed antibiotics. I was caring for the toes themselves properly, but he needed oral antibiotics as well. She added that she doesn't see ingrown toenails in babies very often, but she has seen it before. She said it's definitely genetic and we discussed all the members of my family who have had issues. I apologized to Robbie for the bad genes.

Then I asked her to check his ears because he's been rubbing at them again. She checked them, and sure enough- another double ear infection.

Now, I know you're thinking "wait, didn't he get tubes last week?"
Well, the answer is no. He should have gotten them on Wednesday, but early Tuesday morning I checked on him and found that he was burning hot- About 102. His doctor swabbed him for strep and the flu. Fortunately both were negative. His throat was pretty irritated, but it was declared "just a virus" and he'd just have to wait it out. It only lasted about 36 hours, but that was enough to keep him from having the surgery. It's rescheduled for November 4th.

Even Dr. P seemed exasperated today. "When does he get the tubes again?" It's certainly abundantly clear that he does need them. Hopefully this round of antibiotics will take care of both his toes and his ears and then the tubes will offer us a longer term solution. We're all sick of antibiotics.

In the meantime, he gets plenty of TLC from his grandma. It's good for both of them. 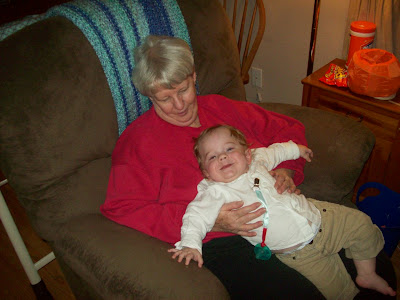 Posted by David, Trish and Robbie Cox at 12:53 AM 1 comments Links to this post

He can't walk by himself yet, but he sure wishes he could.

Posted by David, Trish and Robbie Cox at 12:58 PM 1 comments Links to this post

Yesterday was Robbie's NICU follow up evaluation. The NICU follows their graduates for several years (every 6 months for a couple of years, annually thereafter) to assess their growth & development.

I honestly struggled with the decision to even go. I hate evaluations. There is just no part of having your child judged that is fun. The fact that he's behind means it's going to be yet another opportunity to hear just where my kid sucks. Frankly, I know already. I know he's not crawling or walking or talking. And 95% of the time, I really don't care. I mean, obviously I care but I mean, not as it affects us day-to-day. I am far more focused on what he IS doing than what he's not. But these evaluations force me to focus on the negative.

If they benefitted Robbie in any way, it would be different. But they don't. We already have a team of therapists who see him regularly; nevermind the doctors. They benefit other children. And that's why we ultimately went. They gather the data from the graduates and hopefully learn from it and are able to improve their care for future preemies.

An example of this would be the use of oxygen. Stevie Wonder was a preemie and he is blind because of the use of oxygen at that time. They used to keep the kids on 100% oxygen all the time. This does a great deal of damage to the eye. Later, they discovered this connection and now use less oxygen at a lower rate which has lead to less eye damage in thousands of children. So I know the knowledge is useful.

However, getting there didn't go well. The timing was poor and the weather was worse, but we got there.

Then we waited. And waited. Our appointment was at 1, but we weren't called back until about 1:45. Since 1:00 is supposed to be lunch and naptime, I was already annoyed, now I was even more so. We go back and go straight to the therapy room. Normally the nurse checks you in first but I was informed things were "a little crazy" so they were taking people out of order. The next 30 minutes were spent with a PT & OT rushing through an evaluation. And yes, they were definitely rushing. I've been through this enough times to know it wasn't thorough.

Robbie wasn't thrilled. He rarely dislikes people, but he wasn't so keen on the therapists. And then they seemed to be choosing toys he didn't like. At one point, the PT put a small bunny figurine into a container, trying to see if he could get it out. The trouble was he didn't like the bunny figurine. He paid it no attention at all. When she showed it to him to get his interest, he kept looking away, more interested in the mirror on the wall than anything in front of him. So of course, he didn't go after it. Another time, she wanted him to put small blocks in a small hole. He was more interested in a Gerber Puff and with some prodding from me, she finally just let him put the Puff into the hole. He has the skill, he just didn't like her blocks. (Shortly thereafter, he also put about 6 of the small blocks in the hole as well.)

We then waited another twenty minutes to see the nurse. Robbie was starting to get tired-cranky. I was just plain irritable.

The nurse came in to weigh and measure him. (27 inches, 22lb 14 oz in clothes.) Then we waited again to see the neonatologist.

It was a doctor who hadn't been part of Robbie's team in the NICU, but he was pretty friendly and would round in the evenings when he was on call, so we spoke a few times during Robbie's NICU stay. I always liked him well enough.

He didn't interact with Robbie at all. He came in and started talking to me right away. Basically he said Robbie evaluated at 7 months for "motoring" and 11 months for cognition. The question was what that means. He said that with a 26 weeker with no brain bleed and no complications, he'd expect to see him closer to his adjusted age. He added that he'd expect him to see catch up to his real age between 3 & 3 1/2. Robbie was a 26 weeker with no brain bleeds, bue he has had complications. The chronic reflux, even the couple of wheezing incidents and now the ear stuff all contribute to his challenges.

He said that his gut feeling is that Robbie WOULD catch up. He just doesn't know when. He said that it is possible that he won't. He may have "limited potential." He doesn't think that's the case, though. Simply from observing him (?) and seeing how alert, interactive, interested and engaged he is, he thinks Robbie will overcome his delays. He also added that we are already doing everything that can be done for him and that things are going well.

1) I really feel the evaluation was rushed and incomplete. Because of that, I think he evaluated lower than what he realistically should. This is backed up by the few "tests" I gave him when I got home showing that he can do some of the things he didn't do today.

2) The doctor also didn't really observe him and even with his limited observations, could see that Robbie is awesome.

3) My own gut feeling. I feel like he is making amazing strides lately and I have no reason to believe it won't continue. When I picture the future, I can see us struggling. I see us in therapy until he's 3, and I see us in IEP meetings in schools. But I see him as a late teenager as a happy, smiling, quick witted boy.

As usual, I have the post-evaluation slump. I hate it, but I've learned to just accept it. Wallow for a day and then just go back to life.

At least this time, the doctor didn't freak out that he won't ever speak. He did allude to speech issues because of his feeding slowness, but seemed quite content with my response that we'd already made a plan to start speech-language therapy at 16 months.

I'm still undecided if we'll go back to the next one. It's already set up for May. Once again, I wasn't consulted about a convenient day or time, simply handed a card. And once again, it's at 1:00 in the afternoon which for now is nap & lunch time. I'll decide when we're a little closer to time, I suppose. Maybe in the next 6 months I can work myself up for another crappy review. But if it were tomorrow, I'd opt out.

Posted by David, Trish and Robbie Cox at 12:30 PM 1 comments Links to this post

A quick note to say that Robbie has yet ANOTHER ear infection. He's now on round #4 of antibiotics in the last 8 weeks. He's finally off the breathing treatments, which is good, though.

The doc is having him take a full dose of aug.mentin for 5 days, then lowering to a maintenance dose all the way through his tube surgery (October 14) in the hopes that we kick this one and keep him infection free until then.

Man, this ear thing is tiring. I can only imagine how poor Robbie feels. Though you'd never know it. He did wake up pretty upset Wednesday night (which I've learned is a pretty good sign of another ear infection) and was pretty flushed that morning (just not seeming quite "right") but beyond that, he was happy and playing and perky just like always. I swear, he's freakishly good natured. He definitely didn't get that from me.

And another random video involving banging objects. He also went through a weeklong phase where saying "nanu nanu" and a slurping sound was hysterical. I always love it when something random starts cracking him up.

Posted by David, Trish and Robbie Cox at 11:24 PM 0 comments Links to this post