Well, he's finally breathing more on his own today.
They've lowered his vent settings quite a bit and said they think he will probably come off the vent tonight.
It essentially measures the breaths he's taking on his own, then if he goes too long w/o taking one, it will give it to him. It's not having to do that very often- mostly when he's squirming quite a bit and sort of holding his breath.
He's definitely more back to himself today. He's a wee bit cranky, actually. You can tell he really wants this tube out of his mouth. He's coughing quite a bit. Just from surgery and being too still and not being awake enough to cough or clear his throat, he gets gunk in there. Moving around is good for him.

I hate to be happy that he's cranky, but I am.

One of his laparoscopy wounds was leaking a bit of fluid earlier and scared me. Everyone was running around admitting an extremely early & tiny (earlier and smaller than Robbie was) and I hated to have to ask for help but finally did. It was just body fluid coming from one of the wounds. We had just replaced his bedding so had moved him around quite a bit. They think we maybe opened one of his wounds a bit and let some fluid leak out. It creeped me out, but apparently it's not unusual.

Keep us in your thoughts. We're still staring at the vent and in the ICU portion of the NICU so we're not back to normal just yet. But we're on the right path.

Posted by David, Trish and Robbie Cox at 6:04 PM 0 comments Links to this post

I took a short video of Robbie earlier. It's much brighter on the camera & computer but I guess in the uploading, it's lost some contrast, so you can't see much, but here it is anyway.

Posted by David, Trish and Robbie Cox at 10:35 PM 0 comments Links to this post

He's still pretty dopey and on the vent.

They tell us that some babies wake up in 12 hours, some wake up in 3 days. He is waking up and looking around a bit. He does do some breathing on his own when he's awake, but mostly he's "riding" the vent. (Letting it do it for him.)

He got quite a bit of sedation, so they're not terribly surprised.

It's extremely difficult to see him back down where we started. He's in a diaper, on a vent, in the ICU. It's a bad flashback, really.

The doctor was just by and told me he was doing fine and not to worry. I managed not to laugh at him.

His incisions look really good and all his labs were good, so it's okay.

I spoke with another NICU mom and she said her daughter had surgery when she was 2 days old and it was 2 or 3 days before she was off the vent. That made me feel better.
So, keep praying. The sooner he's better, the sooner we can go back to the room we were in before. It's much quieter & nicer. A better healing environment, in my opinion.
Here's Robbie today: 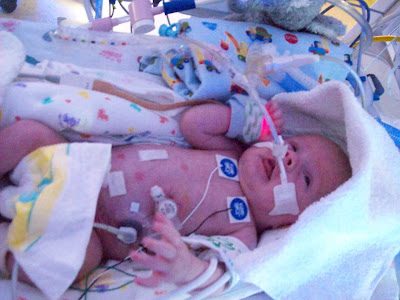 Posted by David, Trish and Robbie Cox at 2:49 PM 0 comments Links to this post

He's out of surgery.
Turns out he also had 2 inguinal hernias that were repaired as well.

He had 7 incisions- four for the hiatal hernia repair, one for the G tube placement, and two for the two inguinal hernias.

He's still pretty much out cold. He's starting to stir just a little bit, but not breathing on his own yet. They just turned his ventilator down a little bit because he was actually doing "too good" on it. Basically the saturation of CO2 in his blood was so low that his brain doesn't think he needs to breathe. So letting his CO2 go a little higher will hopefully signal that a little sooner.

They say probably by morning.

He did well in the surgeries from what they can tell.

Now we just wait for the breathing to start. I hate to will him to wake up because I know he's going to be sore, but I also HATE seeing that ventilator breathing for him. Hopefully by this time tomorrow, he'll be breathing on his own and we'll be back in our old room in the newer NICU.

Posted by David, Trish and Robbie Cox at 7:29 PM 0 comments Links to this post

Surgery is set for around 10am Friday morning.

He'll have a fundoplication (where they wrap the stomach around the esophagus) and a hernia repair (stuffing the stomach down where it belongs.) He'll also have a G tube placed (a port into his stomach through which he can be fed.)
There's a small possibility he may also have an inguinal hernia which would be repaired as well. And I'm going to ask the surgeon about circumcision at the same time. May as well just do it all at once.

Do you feel sorry for him yet? I sure do.

He'll have to be back on the vent for the surgery and will remain on it afterward so he can have good pain meds. The pain meds will depress his breathing a bit, so it's necessary.

We'll be back in the old NICU until he's off the vent. We hope that's no more than overnight, but it all depends on him.

Please keep us in your thoughts and prayers. Surgery is scary anyway, but surgery for a little guy with Robbie's history is terrifying.

Posted by David, Trish and Robbie Cox at 12:29 AM 0 comments Links to this post

Sorry to make my first real update a big one, but I figure there's no time like the present to keep everyone up to date.

Today we found out that Robbie has a hiatal hernia.

This is a condition in which part of the stomach bulges up through the diaphragm into the esophagus. It causes reflux.

We knew he had reflux. Actually 100% of preemies do. It's a matter of degree and treatment.

They weren't expecting this. The director of the NICU said that he's only seen this twice in his 18 years here. It's not related to his prematurity, really. It likely would have been present if he'd been born full term.

The surgery is only successful 80% of the time, but it's all they've got. In 3-6% of cases, they'll actually have to do a 2nd surgery. The remaining part of the time, he gets some relief but isn't cured. All we can do is hope to be in that 80%.

In the mean time, they want to add something called a G-Tube into his abdomen. It's essentially a feeding tube directly into his stomach.

They tell us that it's something to get him home sooner.

There are 3 criteria for a preemie to be able to go home.

1) Breathing well. (Meaning he remembers to breathe all the time and can keep his oxygen up.)
2) Temperature regulation. This usually comes with size, somewhere around the 4lb mark.
3) Taking all his feeds by mouth.

Number 3 is often the thing that keeps babies in the hospital the longest. This would eliminate that.

The tube would remain in at least 5-6 weeks or as long as it takes for him to eat on his own. The nurses tell me most babies really only need it for about 2 weeks. But the way it heals, they leave it in longer anyway because it comes out easier then. It would be removed at an office visit and would heal on its own.

Right now, they're looking at Friday for the surgery. I still have several questions to ask tomorrow and they need to make sure his blood count is good enough to handle surgery (he might need another blood transfusion beforehand) but that's probably when it will be.

He'll have to go back on the ventilator for about a day. We have NOT missed the ventilator and don't welcome its return. We just pray we can get rid of it ASAP. But they'll leave him on it so that he can get good pain meds, so I know we need it.

Please keep us in your prayers. Surgery is scary in the best of circumstances. With his history of breathing troubles, it's even worse.

Posted by David, Trish and Robbie Cox at 12:21 AM 0 comments Links to this post

Hello and welcome to Robbie's blog.

It seems our little boy is very popular these days. In an attempt to keep everyone as up-to-date as possible, we thought we'd start a blog to chronicle his journey.

Pre-eclampsia is a condition caused by pregnancy that causes high blood pressure. There are several elements involved, but essentially, my blood pressure was so high (hovering around 200/100) that they were concerned I would have a stroke. Not only would that be very bad for me, but also would have been very bad for Robbie. After my symptoms worsened, the doctors became convinced I was on the verge of a stroke and Robbie was born via classic C section.

During my short hospital bed rest, I did a lot of writing. I was on a lot of very strong drugs to try to prevent a seizure or stroke and I was a bit woozy. I was afraid that between the overwhelming emotions and the drugs, I wouldn't remember everything from those days so I did my best to keep track of them.

In the coming days, I'll post some snippets of those writings for anyone wondering what the days surrounding Robbie's birth were like.

But mostly, this will be a blog about Robbie's growth & progress. We hope you enjoy it.

Posted by David, Trish and Robbie Cox at 10:46 PM 0 comments Links to this post